A complete UX redesign to bring clarity and parity to iOS and Android for a data aggregation platform.

Premise, a marketplace for global data aggregation, needed help from Grio to bring parity to their iOS and Android apps. Another designer and I created a “style tile” (a condensed version of a style guide), an asset library, a new navigation, updated task marketplace flows, an onboarding tutorial, and a redesigned payment process flow for their users in over 70 countries and 30 languages.

“Our global network delivers real-time, real-world insights that provide leaders with decision-making capabilities. Ask us anything, about anywhere and we’ll deliver actionable data to help your organization develop winning strategies you can trust.” (www.premise.com)

We worked closely with the Premise team to design and develop an updated version of their app to ensure that users can find tasks best suited for them, and get paid for their tasks in their desired currency and payment provider. This project was particularly fun to work on since the main user is not the typical silicon valley, tech savvy millennial. Premise’s main user type is in third world countries using cell phones that are dated and quite small compared to popular phones like the iPhone X. They are also experiencing frequent internet connectivity issues and many are using the payment from these tasks to pay for things like school fees, meals, and home improvement.

For the majority of the project, I acted as the sole designer to bring their iOS and Android apps to parity. Our design work included comparative design audits, detailed user flows, assembling asset libraries, and creating a style tile for both operating systems as well as style guidelines for language typology (short or long languages, right to left or left to right reading languages).


Our team started by first taking into account the issues that they were aware of and specifically wanted addressed. After that, I spent time trying to complete different scenarios with both apps to see how they differed and noted the difficulties trying to complete the tasks. Having a solid understanding of how the design as well as the flows varied was crucial to next steps.

After the initial comparison, I needed to make sure that the client, as well as my team, understood the disparities between the apps and the main flows that we needed to focus on improving. I created several user flow iterations and walked the PMs, developers, and QA through these flows to be as clear as possible and answer their questions. We had weekly check-in meetings to make changes to these flows and address other issues that arose along the way. 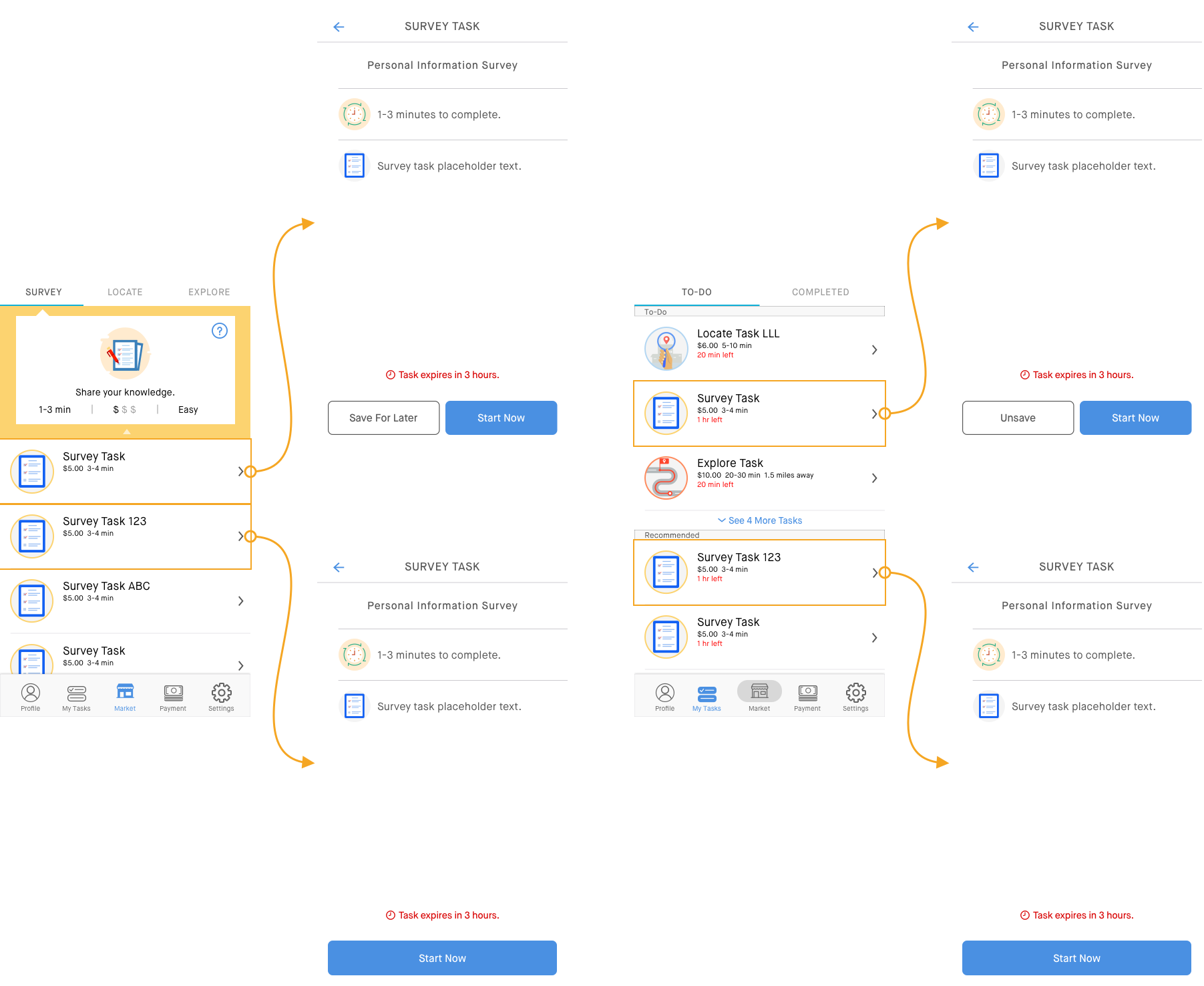 One critical issue found through assessing the task flows was that there were 3 ways to exit a task in the app. It’s not only unclear to the user what to click to exit the task, but also unclear whether the task progress will be saved or not. This issue was quickly solved by instilling best practices and guiding the user through the task experience with clear and obvious icons and messaging.

Three other user experience issues that they specifically wanted addressed were best practices for in-app surveys, how to differentiate manually reserved and auto-reserved tasks, and how to deal with long text style buttons.

3. Premise has users in over 70 countries and in over 30 languages. Handling this many languages is extremely difficult especially when dealing with small screen real estate and long-worded languages. For example, one language they were having an issue with was Filipino. The words and phrases are long and wrapping long text on buttons isn't easy to read. We decided to stack the buttons and strongly encouraged brevity.

After signing off on the task flows and fixing these user experience issues, we moved onto iOS payment flows. The payment flows and states that we needed to create were: transferring a balance into payment provider account, add a payment method, a low balance state, a multiple balance state with multiple currencies, and empty states.

After this, we moved onto the offline states that were needed since most users encounter frequent internet connectivity issues. Before the redesign, the user may lose connectivity and think they are completing and submitting a task, but really they are offline and none of their work is being submitted. This creates a larger issue because users are thinking that they’re submitting tasks so they’re waiting around for payments that will never come. We created a banner and modal for iOS and Android to communicate to the user that they had lost internet connection but could still complete their already saved tasks.

The updated version of the apps were so different from the previous version that we needed to introduce an onboarding tutorial to guide users through the new navigation. My manager actually created the initial designs for this and we ended up only making a few minor tweaks to this for the final version. We introduce them to the new navigation and how it compared to the old version.

Finally, we packaged up all of our assets from past Premise designers and new ones we created into a simple and easy to use project in Invision. Premise employees could download assets and update the asset library as needed. Their “style tile” that I created also provides a standard so that the iOS and Android apps will stay in parity in the future.

We ended up delivering the upgraded version of the apps to the app and play store well before the deadlines. We had an incredibly smooth handoff to Premise developers and once they hired a new designer, I also handed off all design documentation. The updated Premise apps were successfully launched in both stores with new user task flows and payment flows and the style tile and asset libraries are still in use today.

Premise App in the App Store

Premise App in the Play Store